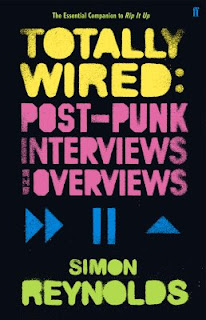 Totally Wired was published last year, but I just got around to reading it now. As the front cover says, this is the "essential companion" to Reynold's previous book on post-punk, Rip It Up and Start Again, with "Post-Punk Interviews and Overviews." The best way to experience this book is to read it in segments. Pick a few interviews, skim the rest. Then when you have some time, really sink into it and read it from beginning to end. There is a logical sequence to the chapters, and so it helps to read them in order. But it's also great to read chapters randomly. There are interviews in the beginning and then some extra chapters with writings from Reynolds that weren't in Rip It Up and Start Again or are re-workings. Totally Wired works well by itself or as an extension of Rip It Up.
Having been a big NME fan in the late 1970s/early 1980s (I read it religiously every week), a lot of these interviews reminded me how much music - and music writing - back then was focused on trying to move music forward in new directions. The music mattered... and so did the ideas. There are often moments in music history when this happens. In this case, the explosion of creativity and innovation that leapt forth from the sparks of underground rock music, glam, free jazz, dub reggae, funk, electronic music, and punk in the 1970s pushed music into the future.
The peak post-punk years as Reynolds sees it were 1978-1984, and I'd agree. I definitely recall a huge transformation around 1978-79, when punk was morphing into something more experimental and atonal. The music still maintained the emphasis that punk had on short, basic songs that dealt with society or politics or everyday life, but the format of basic rock n roll or pop was subverted in different ways. As in Rip It Up, Reynolds makes the connections among proto-punk and no wave bands in the U.S. and post-punk bands in the U.K. But what's really interesting about Totally Wired is that it becomes clearer how there were commonalities among what various people were listening to or reading. It goes to show that there's a certain zeitgeist, with people in different places affected by similar things until it all coalesces in some way at a certain point in time. Or maybe that's the mythology Reynolds wants us to believe.
The interviewees include: Ari Up (Slits, New Age Steppers), Jah Wobble (PIL), Alan Vega (Suicide), Gerald Casale & Mark Mothersbaugh (Devo), David Thomas (Pere Ubu), Tony Wilson (Factory Records), Bill Drummond (Big in Japan, Zoo Records), Mark Stewart (Pop Group), Dennis Bovell (producer), Andy Gill (Gang of Four), David Byrne (Talking Heads), James Chance (Contortions, James White and the Blacks), Lydia Lunch (Teenage Jesus and the Jerks, Beirut Slump, 8-Eyed Spy), Steve Severin (Siouxsie and the Banshees), Nikki Sudden (Swell Maps), John Peel, Alison Statton (Young Marble Giants), Green Gartside (Scritti Politti), Gina Birch (Raincoats), Martin Bramah (Fall, Blue Orchids), Linder Sterling (Ludus), Steven Morris (Joy Division, New Order), Richard Kirk (Cabaret Voltaire), Alan Rankine (Associates), Paul Haig (Josef K), Phil Oakey (Human League), Martin Rushent (producer), Edwyn Collins & Steven Daly (Orange Juice), Paul Morley (NME), Trevor Horn (producer).
Read this book, and let it inspire you as it did me. Despite whatever you may feel about Reynold's writing, he does a great job of capturing the essence of what made post-punk music (and the music associated with it, such as art punk, industrial, synth pop) so liberating and meaningful. The fact that so much of this music is still influential or relevant to people today is proof of its lasting impact, beyond retro nostalgia. Sometimes we have to look back in order to move forward.
There are tons of great YouTube clips of these bands. Since the book is named after a Fall song, here's one of my favorite Fall songs to get you started: "Rebellious Jukebox" from their 1st LP Live at the Witch Trials..."I'm searching for the now"...

Posted by decomposition at 5:05 PM

thank you sharon for taking the time to review this! I had actually not heard of it yet, looking forward to reading it... xoxoxoxo tobi